ARRL did a nice article on Lyda A. Clay KL7OT or Buddy as she was known to us. Below are copies of the articles with links to them on the ARRL Site. The first one is from their site and the seccond one is from QST. You can click on the seccond one to enlarge or print is. If you click the link to the article on the QRZ site you will need to be an active ARRL member to log in and see it.

Arlene “Buddy” Clay, KL7OT, died on February 11. She was 103. An ARRL member, Clay was inducted into the Alaska Women’s Hall of Fame in 2015 for her work in rural justice administration among the Yup’ik people. She became a ham in 1948 and began calling the Thursday night Snipers Net for the Matanuska Amateur Radio Association, a duty she continued from her retirement community home until she died of a stroke.

In 1960, after having worked for years with her husband Earl, KL7EM, as an air traffic controller, she began a new career as a magistrate for the Alaska Court System, becoming responsible for 12 villages along the Kuskokwim, Yukon, and Iditarod rivers. She traveled from village to village by boat in the summer and by dog sled in the winter. In all, “Buddy” Clay spent nearly 70 years living in Alaska’s wilderness. She was profiled in the August 2013 issue of QST in the article "A Radio Voice in the Wilderness" by Brenda Plessinger, AL7LX. 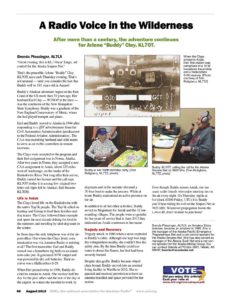